In two days, it will have been one year since I wrote my first anti-blog entry. I think it’s been good for me. And I’ve already got the bug to redesign (this design is only 9 months old).

Turns out I’ve written 71 entries in a year. That’s once every 5 days, on average… not too shabby, but not too great either. I can do better.

Sloan-fest: It did rock. Here’s some stuff (slightly edited) I originally wrote on the Official Sloan Message Board:

Overall I had a great time at both shows. The Sloan lads were really impressed, I think, with the Cleveland audience, even though they complimented the Detroit crowd more. Murphy seemed at least somewhat affected that the crowd was audibly singing along to everything including the new stuff. The band was definitely in a great mood and played excellently. The Detroit show wasn’t quite as good, but it was still… good.

That part of downtown Detroit, though… sheesh. I hope there are better areas of Detroit than that. It’s worse than most parts of Minneapolis, St. Paul, Milwaukee, Madison, Chicago, New York, Columbus, Cleveland, Sarasota, San Francisco, or Santa Cruz that I’ve ever walked around in. It compares unfavorably with Tampa and Oakland as well, though I have little experience with those two cities (like a day or two). I define “worse” as

I must admit there was some promising development in that area (Comerica Park, a couple theaters and restaurants), but it sure has a long way to go.

I was really impressed with Cleveland, in contrast, and we walked from the venue to the Rock & Roll Hall of Fame (a little over a mile). I would HIGHLY recommend a trip to the Rock & Roll Hall of Fame to anyone who can get to Cleveland. Try to go before the end of 2001, because that’s when they’re taking down the incredibly moving John Lennon exhibit.

Okay, from here on it’s fairly Sloan-oriented, but still a good read. Skip to the rest of today’s entry if you really don’t care.

In Cleveland, Sloan came out planning to play the same setlist as the night before (a slight disappointment) but changed a couple things after polling the crowd (“who’s here from the Detroit show last night?” got a roar from at least half the crowd, conservatively).

The best thing about the club (Peabody’s Downunder, whatever) was the superior sound quality. The mix was perfect, I thought. (For example, It’s In Your Eyes sounded really good as a loud rocker there, and it just sounded messed up in Detroit.)

Otherwise, Peabody’s was a joke. The tickets and the sign posted in the window said that showtime was at 7pm. They didn’t even let us in until 8 or 8:30 because they had to put up 100,000 Guinness signs. They definitely could have sold more beverages had they let us in, the morons. I purposely didn’t buy anything there because they left us out in the cold (okay, it wasn’t that cold, but there was a lake effect). Plus between the bands, twice, some tool producer of a radio show in Cleveland came out and plugged Guinness annoyingly.

The club makes a laughable attempt to “categorize” the bands that perform there on the oversized calendar hanging in their window. Listed for Saturday: “Sloan / Emo Rock”. Since Sloan is obviously not “emo”, we diehards outside speculated that some band or person named Emo Rock might be opening. Then we saw the poster: “Ultimate Fakebook WITH Sloan November 17th.” with the fakes’ web address at the bottom. Uh, yeah, whatever. The club also has such useful and distinct categories as “Hard Rockin’ Rock” and “Extreme Hard Rock.” Credible as hell.

Unbeknownst to us, three bands were playing. The first band, “Sad Davie,” was actually pretty good, I thought. [Were they emo? Someone who knows, tell me.] Amusingly, the members of that band were the people we annoyed (?) through the window by holding up notes asking what was on one of their shirts that was partially obscured by a jacket (disappointingly, “Life is too short to drink cheap wine”) and offering the lead guitarist (we didn’t know) a piece of gum to let us in. He then pantomimed some other things he’d rather have (I swear that one of them was shampoo).

Chris and Patrick [two members of Sloan] attempted to make a joke (that fell flat) about the guy who was wearing the shirt that said “at least I’m still cool to one girl” [a Sloan lyric]. It’s not really worth explaining. I pleaded, “just play the song!” Chris saw me and echoed my gesture, saying “for the love of god, just play!” It was funny at the time.

Anyway, it was a great show. I asked Chris after the show if they were coming to Minneapolis, and he said, “not this time, but in the new year.” Hope that’s January-March, not November-December….

Apparently Will’s friend Penny had an even better experience at the New York City Sloan show. He says she was the one that got picked to go up on stage and play Chris’ bass during their song Underwhelmed (a Sloan tradition). And, unlike anyone I’ve seen up there, she actually PLAYED it. Apparently the band wants to keep in touch with her. Wow. [Photos below courtesy of a friend of a friend of a friend.] 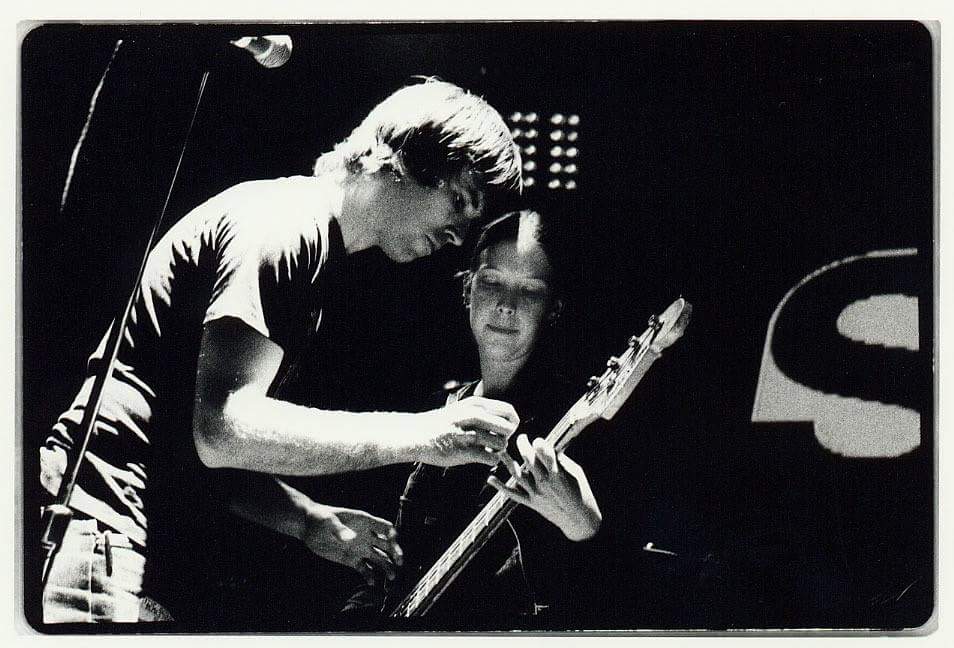 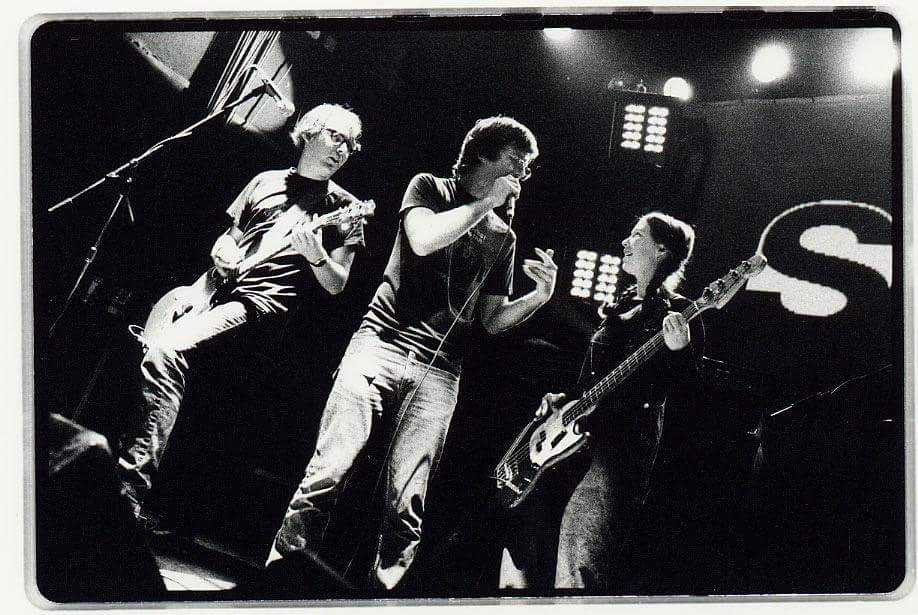 This site blows me away: The All Music Guide. It makes connections between… well, between pretty much every band that’s put out any music in the last, oh, century. It’s part of the All Media Guide, which apparently tracks games and movies as well. It’s completely amazing. Just put in a band you like and get more information and more leads for more good music than you can even imagine listening to.

I should find out by the end of tomorrow whether we MAPErs approved our contract or not….

And, oh, yeah, the Twins may be no more. 41 years of history bought for $200 million. I don’t like the stadium that much, but I didn’t want this to happen. Of course, it’s not as if it matters much, but I enjoy going to a baseball game from time to time. Unlike most fair-weather Minnesota fans, I’ll go even if they’re losing, because it’s the game I enjoy.

back to the grind

Well, okay, let’s see. As I mentioned, the strike is over. I’ve been back at work (which has basically been normal) for the last three weeks. The contract is expected to be approved by the membership, but the Republican-“led” House may hold it up because of same-sex domestic partner benefits. Bigots.

In happier news, I’m heading off to Columbus, Detroit, and Cleveland at the end of next week for an awesome Sloan-fest with Will. We’ve got tickets to see them in Detroit on Friday 11/15 and in Cleveland Saturday 11/16. It promises to kick ass. In Sloan’s words, “Are you one of the ones who went and gave up on rock and roll?” Nope, not me.

Typical: I have this friend in Detroit (Cheryl), whom I’ve seen once since college (geez!). I figured, hey, it’d be a great idea if I invite her to the concert and, heck, see if Will and I can crash at her place. No such luck—the one weekend I’m going to be there, she’s going to be in Madison for the UM-UW football game. Ah well. Typical. Oh, and yeah, she likes Sloan. (Sloan is one of the bigger bands in Canada but barely gets any airplay in the US, which is fine with me. Detroit, being so close to Canada, of course, gets a bit more cultural crossover than does the rest of the US—hence Cheryl’s familiarity with, and moderate preference for, said awesome band Sloan. Actually, she wrote, “Sloan rocks.”)

Exactly 2 years ago, I spent my first night as a resident of Minneapolis. Where will I be a year from now? I don’t have any idea.

Today I was chatting with Nick over MSN Messenger (bleah—he prefers it—though I do like the extra weird dingbats [send the string “(D)” while using it, for example] and the fact that it can tell when the person you’re talking to is typing a message), and discovered that Nick has become some sort of Zen master. He claimed not to realize that he was, but of course he would.