In case this is of interest, here’s the updated colophon for this version of the site, roughly version 5. It’s built in WordPress using a very nice theme by Anders Norén called Lovecraft, as of 12/26/2018. 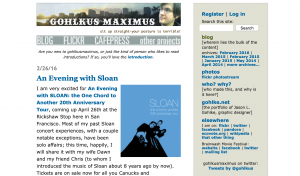 This is the first time I have used a theme I did not design on this site. I built my prior theme, which I had entitled “New Slang” in an homage to the Shins song, in 2007. This coincided with my painstaking migration of, at the time, seven-plus years of posts written and uploaded in good old static HTML (giving them all titles along the way). Luckily, my posting schedule was occasional even then.

Fast-forward past a few years of reasonably active posting and several years of neglect, after which I mirrored it temporarily at another host intending to migrate it permanently, got mercilessly hacked, and restored it from backup using the newest version of WordPress. I moved to this modern theme by an actual theme developer so that I could get the site operating again. I like the idea of keeping this thing online for those who may remember its existence. Finally, in February 2021—almost exactly twenty years after launching it—I moved it permanently to NearlyFreeSpeech.net hosting, which is very inexpensive and adventurously minimal.

Photos: Generally speaking, I’ve taken the photos on the site unless otherwise credited (but not always). The photos that currently alternate in the header were taken at Bennett Lake (Bennett, British Columbia); the eastern shore of Oahu, Hawaii; Alcatraz Island looking toward San Francisco; the Municipal Pier in San Francisco looking toward downtown and Ghirardelli Square; Crissy Field in the Presidio looking toward the Golden Gate Bridge; the Oakland/Alameda County Coliseum (at an A’s game); Lydgate Beach in Kauai, Hawaii; and of Boris and Marley in our apartment in Madison, WI.

Typefaces: For a little while I used Bodoni URW in the header, which at the time I’d correctly predicted would be transitional. (I went back to something I like that I think I’d previously done, which was my writing the name of the site in pencil.) On roughly version 4 (“New Slang,” as referenced above), I used a lovely display typeface called “Big Top” by someone called Shamrock. 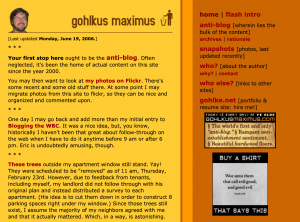 In the header and flash intro of version 3-ish (and in the header of this version for a time), I used a font called Accidental Presidency by Tepid Monkey Fonts. 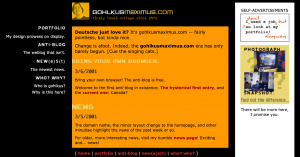 Previous versions of the site relied heavily on Ray Larabie’s excellent fonts, including Screengem, Joystix, and Blue Highway (which I also used at work back in the day). The first version of this site featured a lot of a typeface called Flotsam Smart. I may redesign it again when the whim strikes me.

Thanks for stopping by; enjoy!