In I Hate Politics 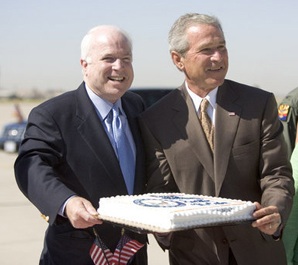 “That’s Bush and McCain celebrating the latter’s birthday in Arizona exactly three years ago today – just as New Orleans was being inundated. The cavalier cluelessness….”

In Amusing (if only to me), Picky, picky.

In Amusing (if only to me), Sports, Unfinished Thoughts

Sometimes bad things happen to good athletes: What didn’t make it to the Olympics.

Where are they now?

This is what Tantek Çelik told me about using the Box Model Hack in 2008. The simple answer: use it if you still need to serve Internet Explorer 5.x for Windows.

Lest I forget, Chuck Lewis, the SEO Rapper (yes, that’s right, he is the “Search Engine Optimization Rapper”), presented his rap stylings at WordCamp 2008. I don’t even know what to say except that I really enjoyed his performance and that he is truly one of a kind.

He was a great sport and a nice guy, and his rhymes were the best I’ve ever heard about WordPress.

Here he is rapping about his Social Media Addiction…

David Byrne & Brian Eno – Everything That Happens Will Happen Today

David Byrne & Brian Eno – Everything That Happens Will Happen Today.