An Evening with Lawrence Lessig, founder of Change Congress.

Wish I had heard about this before it happened. I don’t know how I didn’t. But I was out of town anyway.

Greening the Ghetto – Can a remedy serve for both global warming and poverty? Van Jones is trying to find one.

Blog by Mark Blumenthal at Pollster.com about 2008 election polling and what it showed

Simply Scripts — the text of many, many film scripts

Found via Very Short List, a daily email with exactly one recommendation per day (which I found via TicketWeb)

AC Transit History: From Streetcars to BRT, by V Smoothe

Frank Gohlke at the Smithsonian

I’ll take a sane president over an abundance of material for columnists any day. That said, I don’t want to read any more columnists complaining that they don’t have Dubya to kick around anymore. It strikes me that the basic message there is, “I’ve gotten used to being able to lazily phone it in, because Bush was such an easy target. Oh, no, now I have to actually do some research.”

Well, they won’t have to look too far if they’re looking for politicians’ failings. There are many.

We’re all so juvenile

In Amusing (if only to me), Life 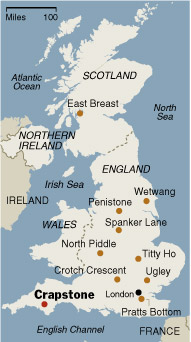 5 more things President Obama can do right away

President Obama has been in office a good five days now, and he’s taken several important steps to signal his willingness to reverse some of the worst mistakes of prior administrations. Of course, followup is the most important part, but he has:

Sure, there are more, but you get the idea. Here are some of the next things I think he should do — with varying degrees of difficulty, but that probably will be received largely favorably — that will help this country get back on track as a place of freedom, innovation, equality, and opportunity:

That’s just a few, off the top of my head. Can you think of any more?

In Amusing (if only to me), Photography

Four photos through distorted glass, animated. Click or tap the image below to toggle the (silly) animation (warning: may cause motion sickness).