David Brooks’s column [“Moderate Mitt Returns,” October 4, 2012] taking Mitt Romney’s debate comments at face value is either dangerously naïve or disgustingly disingenuous. When Romney didn’t think anyone but his rich friends were listening, he showed his true colors. He does not plan to work for the interests of the American people as a whole; therefore, he is unworthy of being elected President. Anyone who lies as obviously, audaciously, and frequently as he does should never be entrusted with that much power and access.

For the Times’s sake, I’m really hoping I just didn’t get the joke and the whole thing was one big winking joke soaked with sarcasm, like a nice moist piece of tiramisu. I don’t think that’s the case here, unfortunately.

As I’ve said here a zillion times, I hate politics. Right now, though, it seemed like a good idea to dash off a note, if only to get it on the record. Mitt Romney is too dangerous, and President Obama is just good enough, that I am horrified at the prospect of Mitt Romney actually winning.

That said, I had absolutely no fear that Romney could actually win this thing — after all, John Kerry lost because he got tagged as a flip-flopper, and Romney is 100 times worse, and a bunch of other reasons — until reading David Brooks’s steaming pile of electrons.

Established news organizations are so desperate for eyeballs that they (a) will do anything to keep the horserace close, since that keeps them relevant and (b) sensationalize as much as possible to get as much attention as possible. There’s also the big problem of liars being given the benefit of the doubt. In the gradual shift of news departments’ focus from investigation to entertainment, truthiness is as good as truth. And I don’t think the majority of the public — and worse, the journalists — can really tell the difference (or care to do so). The irony is that the entertainers (Colbert, Stewart, The Onion) are the ones telling the truth now, through satire and parody.

I don’t really think Romney has much of a chance. I think, or hope, Obama was using a bit of a rope-a-dope strategy (though it’s not exactly clear which candidate was doing so).

To be clear, my fondest political hope (which seems incredibly unrealistic) is for the Republican party to dissolve in internecine conflict after losing this election, for the majority of the “mainstream” Republicans to flood the Democratic party (moving it really not that much farther right than it already is), and then for the progressives to bolt the Democrats and create a viable third party with a kind of progressive/libertarian flavor that captures everyone’s imagination and ultimately gives real power to people fighting the corporations. That might not happen in my lifetime, but it’s a happier prospect than some massive catastrophe that requires us all to learn survival skills and start over*… or a continuation of the slow decline of the middle class that results in something very close to feudalism.

You can see why I kept my letter to the Times short.

5 more things President Obama can do right away

President Obama has been in office a good five days now, and he’s taken several important steps to signal his willingness to reverse some of the worst mistakes of prior administrations. Of course, followup is the most important part, but he has:

Sure, there are more, but you get the idea. Here are some of the next things I think he should do — with varying degrees of difficulty, but that probably will be received largely favorably — that will help this country get back on track as a place of freedom, innovation, equality, and opportunity:

That’s just a few, off the top of my head. Can you think of any more?

There are important things in California still to decide… and nationwide… so keep voting till the polls close!

gohlkusmaximus calls it for Obama

If you add the 200 electoral votes NBC News has called for Obama to the 55 he’s going to win in California, the 7 he’ll win in our neighbor to the north (Oregon), and the 11 in the great state of Washington, and, heck, give him the 4 in Hawaii… that gives him 277 right there. Bam.

(Damn, Olbermann just scooped me on MSNBC while I was typing this, and then the browser crashed! Ah, well. Still, calling it earlier than any major media outlet… of course, it’s a little less irresponsible for me to do it than it would be for them.)

My third niece, Susan, was born today in North Carolina! I get to meet her in about six weeks.

Edit: Here she is! 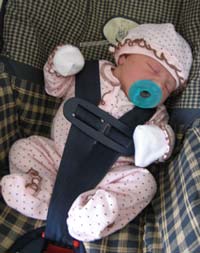 Oh, and, yeah, there’s an election! Things have been incredibly busy at work lately — what with the election coming up, and the Scorecard scores being released, and the preparations needed for the December 3rd fundraising event…. and though I didn’t give a ton of my free time to helping elect Obama, I spent a lot of time at work doing so, and gave his campaign money on nine occasions in 2008. Plus I contributed to some local and national Congressional races.

END_OF_DOCUMENT_TOKEN_TO_BE_REPLACED

If you need any more incentive to give to Barack Obama

In Amusing (if only to me), Culture, I Hate Politics, President Barack Obama, Recommendations

Miranda July and Carrie Brownstein have thoughtfully compiled a (mildly humorous) range of choices for how to contribute to Barack Obama, including the option of purchasing up to three videos produced eight years ago for $10 a piece (which will then be contributed directly back to Obama).