Category: I love Oakland Page 1 of 2

I occupy Oakland every day

Upon reflection, I find it wonderful that a movement of people is growing around the concept that the rich don’t pay their fair share (they don’t) and that corporations have too much power (they do). The Occupy Wall Street movement in some ways is exactly what I think is necessary.

From my perspective, though, here’s the sad thing about today’s “general strike” in Oakland: I have over 150 hours of vacation time, over 100 hours of sick time, and a floating holiday available to me. And I agree with the reasons Occupy Oakland is doing it. However, I don’t feel comfortable taking a day off in what is invariably the busiest month of my job.

This is my dilemma with the Occupy movement right now: The vast majority of the 99%, like me, are living paycheck to paycheck. I don’t feel comfortable taking the day off — much less spending weeks protesting in Frank Ogawa Plaza. And there are many people in far worse situations than I who are going to be displaced today here in Oakland.

It’s not as if I’m sitting on the sidelines. The reason I’m going to work today is that I want to help ensure the California Environmental Scorecard is produced on time, containing as few errors as humanly possible. The Scorecard helps keep California legislators accountable to the public for their votes on environmental bills.

I’m not a fan of politics, especially as it’s practiced in this country right now. One day is not going to jeopardize my job, nor is it likely to significantly delay the Scorecard. But considering everything I have to do for basically the right reasons this month, I can’t afford to take a day off to occupy my own city.

In Amusing (if only to me), I love Oakland, movies, Photography 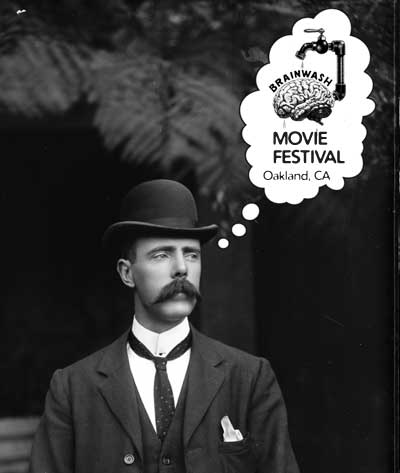 I’ll bet you didn’t know that the New York Times says the Brainwash Movie Festival is “pirating a piece of that old Hollywood magic and challenging conventions on the role of public space in the process.”

Funny, because Brainwash organizers say, “We project movies onto a tarp in a parking lot in Oakland.”

Brainwash features a great mix of new movies from the Bay Area and all over the world, featuring dark humor, animation, mockumentaries, and much more. See http://www.brainwashm.com/festival/2010-festival/ for this year’s full program.

What’s a Drive-in Bike-in Walk-in Movie Festival? It’s set up like a traditional drive-in with FM sound as well as two big amps. Arrive however you choose: drive, bike, or walk in, perhaps with your favorite chair or blanket. West Oakland BART is one block away.

Admission is just $10, or a $40 Festival Pass gets two people into all three nights of the festival. Tickets are available at http://www.ticketweb.com/snl/EventListings.action?orgId=16986 or at the gate. More about Brainwash.

Also, I’d be glad if you wanted to post one of these lovely banner ads (below and in the sidebar) on your own site. Somehow that seems unlikely, but you never know. 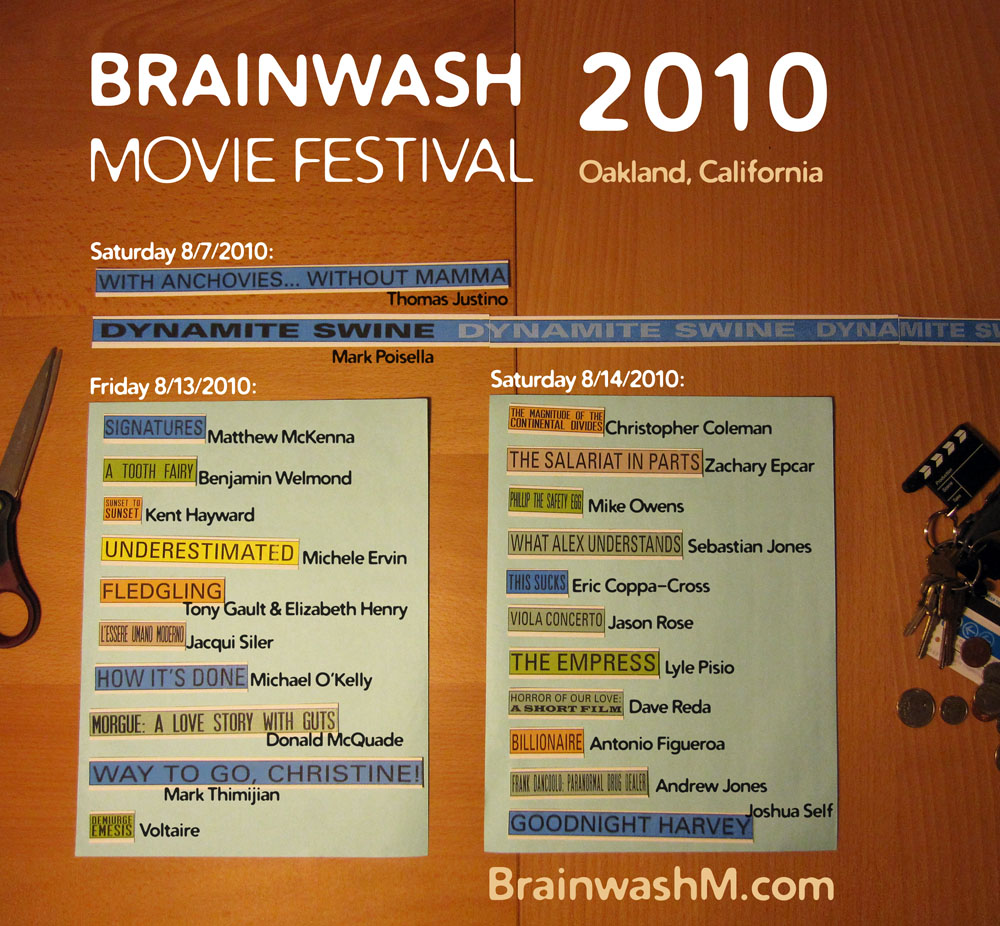 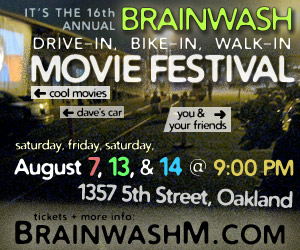 You know you’re in Oakland when…

In California, I hate Oakland, I love Oakland

You get into the Zipcar and it smells like weed. The New York Times says the Brainwash Movie Festival “pirat[es] a piece of that old Hollywood magic and challeng[es] conventions on the role of public space in the process.” (Now Playing, a Digital Brigadoon, 7/29/04, Chris Thompson)

The sometimes thought-provoking, often wacky, but always original Brainwash Movie Festival returns in the summer of 2009 for what could be the best festival ever.

“These are movies that know they’re movies,” claims festival judge Jason Gohlke. “If you like the art of storytelling, if you care about the suspension of disbelief, or if you just like watching moving pictures on a screen, you don’t want to miss Brainwash this year.”

Attendees to the festival are encouraged to either drive, bike, walk, or take public transit to the venue, where movies are screened in traditional drive-in movie theater fashion, complete with FM transmission and a full-service concession stand.

The fully juried festival will screen 23 original shorts in two separate programs (see http://www.brainwashm.com/2009/07/2009-brainwash-program/). There will also be a Premiere Party — Brainwash Zombie Night — on July 18th at 9 pm at 1357 5th Street in Oakland, which will be the West Coast Premiere of the feature film “Doctor S Battles the Sex Crazed Reefer Zombies: The Movie.” Filmmaker Bryan Ortiz of San Antonio, Texas, will be in attendance for Q & A.

Admission is $9 per person per night OR $30 for a Double Brain Pass, which gets two people into the entire festival including a special exclusive preview night. Buy tickets at http://www.ticketweb.com/snl/EventListings.action?orgId=16986 or at the gate.

In Culture, I love Oakland, Life

I’ve been spending lots of my free time — even when I was on vacation and out of town — working on the Brainwash Movie Festival. (Here’s Brainwash on Facebook — become a fan!)

That would be the Bay Area’s own original Drive-in, Bike-in, Walk-in Movie Festival, held within spitting distance of the West Oakland BART station.

2009 marks the 15th annual festival (founded by the mysterious Shelby Toland and one of my co-workers, Dave Krzysik), and I’ve been helping out for at least the last five years. Sometimes it’s felt like 500, but this is not one of those times. This is the first year I’ve officially been a partner in the festival.

I launched a new website (which still needs some images and stuff) when I happened to be out of town, designed some new flyers, put us on Facebook, helped judge the movies and set up the program (and 24 of the 25 shorts are actually really GOOD), and then this past weekend helped shoot the trailer for this year’s festival (finally). It’s all been a lot of fun but pretty exhausting. Hopefully we’ll get a good turnout, but it’s always hard to know what’s going to happen.

The venue is actually a little up in the air, which is a humongous pain, a problem for promoting the festival, and a story I (or Dave) can tell you some other time. Parts of the festival will almost certainly be at the Steel Building at 18th and Mandela — we will know if we have to move it on Thursday.

But I can say with confidence that if you come to the festival you will enjoy it.

Buy tickets in advance on TicketWeb. Hope to see you there!

A series of 3 vignettes

Life in the Bay Area, Part I

Thursday, I showed up to work on time.

END_OF_DOCUMENT_TOKEN_TO_BE_REPLACED

In I love Oakland, Life

Wow, it’s already July 3rd. I spent much of June preparing to move, which ended successfully. I now have a one-bedroom apartment in downtown Oakland, just 7/10 of a mile from work, more convenient to public transportation (about the same distance from the TransBay bus, and much closer to BART), and no longer on a hill. No roommates, also, for the first time ever. Freedom! (Well, of course, I have to make sure not to annoy my neighbors in this 30-something-unit building.) I need to get a few things to make it a truly functional place, such as, among many other things, lighting for the living room, but eventually it will be pretty much ideal. I plan on staying for a while.