Here’s a Canadian perspective on Why Halloween is the New Christmas.

Speaking of scary, why do Ben and Jerry (of expensive ice cream fame) have a Halloween page and why is it ranked #7 on Google for “Halloween”? [Eventually it became this, which is kind of cute.]

In keeping with the scary theme, I added a bunch of stuff to my novel page, including the addition of a separate page for the weblog and other surprises.

I’ll make an effort to avoid the word “D’oh!” 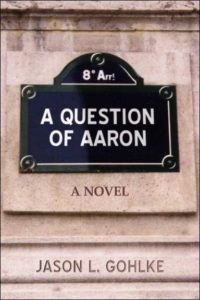 Since I’ve all but finally decided on a title, I designed the book cover. I went through some of my photos and found a couple perfect candidates. After mocking up two covers, I settled on one. I’m amazed how quickly I designed it. (2021 addendum: In retrospect, maybe I enjoy designing book covers more than writing fiction.)

I’m starting to like the title more and more, by the way.

A quick inventory shows that, so far, I have one title, zero words written (as the rules dictate, of course), one vague outline, three ill-defined characters, and a slickly designed book cover. I’m ready to start writing in roughly 17 1/2 hours, sure.

[Note: this blog entry originally appeared in my November 2002 NaNoWriMo blog, “Notes on the Text.” I’ve now moved all of those entries into the “Imagine a Novel Weblog” category of this blog.]

heading for Somberland at this rate

I spent a lot of time tonight working on possible chapter headings and a plot outline. Both are very, very vague, and I’m probably taking too serious a tack. Maybe it’ll turn out amusing, but I’m heading for Somberland at this rate.

I had tentatively decided to call my main character David. I wanted a fairly common name for men of my generation that implies strength when faced with adversity. Tonight, I came up with what I thought was a great title: A Question of David—meaning both “The subject under consideration is David” and “A question asked of David.” Fine, right?

Unbelievably, a quick Google search revealed that there was already a book called The Question of David, a true account of a disabled woman’s effort to adopt. My immediate solution was to change his name to Aaron, but I still like “David” better.

[Note: this blog entry originally appeared in my November 2002 NaNoWriMo blog. I’ve now moved all of those entries into the “Imagine a Novel Weblog” category of this blog.]

the anticipation is killing me

This morning—early this morning; yesterday, for me, really—I added my site to the NaNoWriMo webring (see bottom…). I’ve never had the desire to be part of a webring before. However, I think in the attempt to do something difficult and new, it will help me to be able to easily find others who are doing the same thing. As an added bonus, it serves as evidence to you that there are others—many others.

With barely 33 hours before I can begin writing, the anticipation is killing me.

[Note: a form of this blog entry originally appeared in my November 2002 NaNoWriMo blog. I’ve now moved all of those entries into the “Imagine a Novel Weblog” category of this blog.]

In Administrivia, Imagine a Novel Weblog, Life, Minnesota, Sad (if only to me)

What a wretched weekend it was. I’m just now getting over a week-old cold, one that took me out of commission Thursday when I attempted to call Californians about the environment. (I found it surprisingly difficult to work on the phone without my main tool of persuasion—my voice.)

Much worse, of course, was waking up to Friday’s news that Senator Paul Wellstone died in a plane crash in northern Minnesota. I can’t begin to describe the sadness and shock I felt when I found out one of my real heroes had died. Steve Clift of Minnesota E-Democracy has created a moving Wellstone Tribute site.

That night, I was too sick and worn-out to go to a Halloween party I’d been invited to by one of Dave’s friends (who also goes to trivia night every week). And Saturday morning I woke up too tired to go to the big peace rally in SF. Crap. I’m starting to feel better, though.

Impulsively, I decided last week to devote many hours of my time in November to participating in National Novel Writing Month (NaNoWriMo, for short). I have a fortune cookie fortune stuck to my computer monitor that reads, “You will become an accomplished writer.” Having glanced at that tiny piece of paper every day for the last year or so, my subconscious apparently decided this is the way I can begin to fulfill that crispy prophecy.

Do you have the time to write an average of 1667 words a day next month? Why not sign up along with me? You know it’ll be fun. Winners receive, uh, nothing. Well, their names will be posted on the web site and they’ll have the satisfaction of being able to say, “Yes, I’ve written a novel.”

[Note: this blog entry originally appeared in my November 2002 NaNoWriMo blog. I’ve now moved all of those entries into the “Imagine a Novel Weblog” category of this blog.]

I guess I’ll use this space to document minutiae that I anticipate “normal readers” of my anti-blog won’t care to read every time I post. However, I reserve the right to scrap this page and just write about writing (sigh…) in the anti-blog.

See, I’m not entirely certain whether the process of writing an average of 1700 or so words a day will increase my anti-blog output (since I’ll be so used to writing) or whether it will decrease it (since I’ll be so tired of writing). This will be an interesting experiment for me.

In the meantime, I’m a bit worried about what I’ll actually write about. In the past couple years, I’ve occasionally thought about writing fiction… someday. I’ve also casually considered writing a fictionalized account of some things that have happened to me (i.e. the Dave Eggers approach, which might be cheap, since I’m not Dave Eggers). However, I don’t have any idea what I’ll start writing about in three days. I have a few themes and concepts in mind. I’ll probably write in first-person. Still, I don’t have any clear ideas about characters, plot, setting, genre, or anything else. You know, all those other things that go into writing a good novel.

Of course, there’s the proverbial rub. The “contest” isn’t really designed to elicit good novels, just 50,000-word novels. I, however, am used to holding myself up to a high (and often unrealistic) standard, which often results in my not trying new things (since I obviously can’t start with a high level of skill). Though I’m convinced that what I write will not be total crap, I just have to accept that it won’t be great. I also have to tell myself that this is an exercise to help me learn to write. Throughout my life, the more pressure I’ve been under, the better work I’ve created, and, I think, the more I’ve learned.

I also need to make time to do the freelance work I’m getting paid to do, but that should be no problem. I work 20 hours a week at CLCV, and have scheduled in 20 hours a week to do NARRP until I’m done. The rest of the time I’ll spend writing. [Sleeping and eating will come naturally.] This is not self-deception, I swear.

part of a weird new program

Corruption in my home state: The big news of the day is the investigation into the widespread corruption at Wisconsin’s state capitol among the legislative leadership of both parties. The Dane County D.A. filed 20 (twenty) felony charges against the Senate Majority Leader, Chuck Chvala and more felony charges against Assembly Republican leadership.

I’m mildly embarrassed to admit I voted for Chvala for governor in 1996, but only because he was running against King Tommy.

As for me, I’m doing all right. Getting good grades. My future’s so bright…. ah, never mind.

I was officially awarded the NARRP (National Association of Recreation Resource Planners) freelance web design project on Tuesday. I’m pleased. Now I just have to get started. I’ll spend some time this weekend working on it, I suppose, since I didn’t really have time to devote to it this week.

I’ve also been calling people at random to ask them to join the California League of Conservation Voters (CLCV). Well, actually, I’m working for CLCV as a new member canvasser. (Sound familiar?)

I’m actually part of a weird new program they’re starting in order to get new members over the phone. Though it is a unique mental challenge to convince someone, in one phone call, to join a group they probably know nothing about, phone canvassing is far less strenuous than field canvassing. Instead of walking around for five hours, I’m simply sitting in a chair for four. And I can bike there, or take BART, extremely easily.

Since nearly every paragraph in this entry begins with the word “I,” betraying my egotism, here’s a paragraph about my roommate Nick. When asked what he thought the “readers of my website” might find interesting about him, he only replied, “I don’t know—Coast Guard?”

I put my third set of license plates on my car today. Though I’ve heard horror stories about the California DMV, my experience today was at least as good, if not better, than my experiences with the DMV in other states. I know that’s not saying much, but consider that it took me just three hours to do everything I needed to do: I got there at 9 am—just in time for my appointment, set online a week or two ago—and filled out the drivers’ license and car registration forms. I waited as the DMV employee verified my car and was relieved to discover that it does, in fact, exist. I took a (cursory) eye exam and a 36-question written test. I drove down to the gas station and paid $58 for them to check my car’s emission (a “smog test,” as they call it here). I went back to the DMV, surrendered my Minnesota plates (with a twinge of regret that I couldn’t keep one as a keepsake, though I probably could have tried giving them just one), and got new plates, borrowing their screwdriver to affix the new plates to my car.

I was at home with lunch by 12 pm. Not bad, I say. The people at the Oakland Claremont DMV were actually friendly and seemed even to enjoy their jobs. Let’s see how fast my new license and title get to me in the mail, though.